This is a Historic and Religious location.

You must purchase tickets when entering archaeological sites.

Definitely request for a Tour Guide fluent in the language of your choice to understand what you are looking at.

Anuradhapura is recognized as the first ancient capitol of Sri Lanka according to Buddhist literature. This is identified as the time that Buddhism established deep roots into the society. Even though evidence exists to indicate that an advanced civilization did exist prior to this era, Buddhist literary sources only account as far back as the establishment of Anuradhapura Capitol. With strong relationships with India, specially Emperor Asoka, Buddhism established strong roots into Sri Lankan culture and lifestyle during this era.

The city is surrounded by several large reservoirs, all man made. Their purpose was to provide people with water for drinking and farming, with the added benefit of cooling down the city limits despite this being in the dry zone of Sri Lanka. The city also holds multiple Buddhist monuments, the most sacred being the Sacred Bo Tree, “Jaya Sri Maha Bodhiya – ජය ශ්‍රී මහා බොධිය”, directly descending from the original “Sri Maha Bodhiya” in Buddha-Gaya, India, under which Lord Buddha attained enlightenment.

Multiple foreign invasions, specially from South India, resulted in the destruction and eventual fall of the Anuradhapura Kingdom. Although many magnificent structures were built during this era, majority of them were ravaged by the enemy forces. What little left today for you to see are actually the achievements of decades of archaeological restorations. 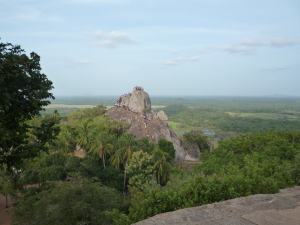